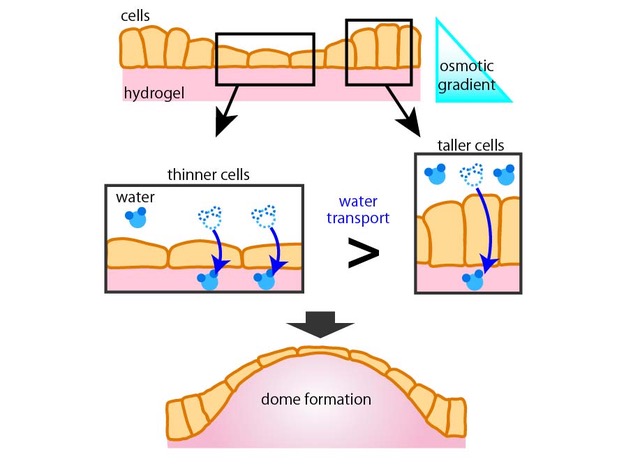 Laboratory of cell dynamics in faculty of advanced life science has found that cellular dome formation on hydrogel is induced by osmotic gradients. They report their findings in the Journal of Cell Science (Ishida-Ishihara et al., JCS, 2020).

Organs in our body has complicated 3-dimensional (3D) shapes. It has been long standing question how the shapes are generated. Osmotic pressure is the important for keeping the homeostasis in our body. Recent studies have been reporting that osmotic gradients play a key role in 3D shape forming. For investigating the osmotic contribution to shape forming, in vitro experiments are useful because they have the advantage of controllable experimental conditions. However, in the previous in vitro experiments of osmotic gradients, the stable 3D structures, which are observed in vivo, have not been observed.

Therefore, the researchers improved the experimental system with the use of hydrogel to mimic the in vivo conditions. With this system, they applied the osmotic gradient to the sheet of cells and observed that flat cell sheet deformed into dome-like structure. In addition, the domes obtained the stability which were not observed in previous in vitro studies. The further observations showed that the hydrogel heterogeneously swelled during the dome formation. The cell culture experiments and the mathematical model demonstrated that the heterogeneous swelling is induced by cellular water transport in cell height dependent manner.