We are interested in the mechanisms that enable change in the chromosomal environment in mammalian cells. Establishment and maintenance of heterochromatin may play an important role in controlling gene expression during development and differentiation. We have revealed that heterochromatic protein HP1 associates with more than 100 proteins. Among these factors, there are some that can induce active chromatin and some that can induce silent chromatin. This suggests that heterochromatin has two intrinsic functions to maintain the chromosomal environment and to change one state to another state. We intend to uncover the mechanisms and regulation of conversion of chromatin state by HP1 and its binding partners, using omics strategies such as proteomics and genomics combined with existing approaches such as cell biology, genetics and biochemistry. This study will contribute to understanding not only the mechanisms of differentiation but also genetic diseases and the development of cancer. One of the achievements was published in Nature Cell Biology (2010). Furthermore, our omics strategy has contributed to uncovering pathological mechanism involved in homeostasis of calcium ion or gastric cancer by Helicobacter pylori.

Analysis of genetic inheritance and functional expression by omics approach 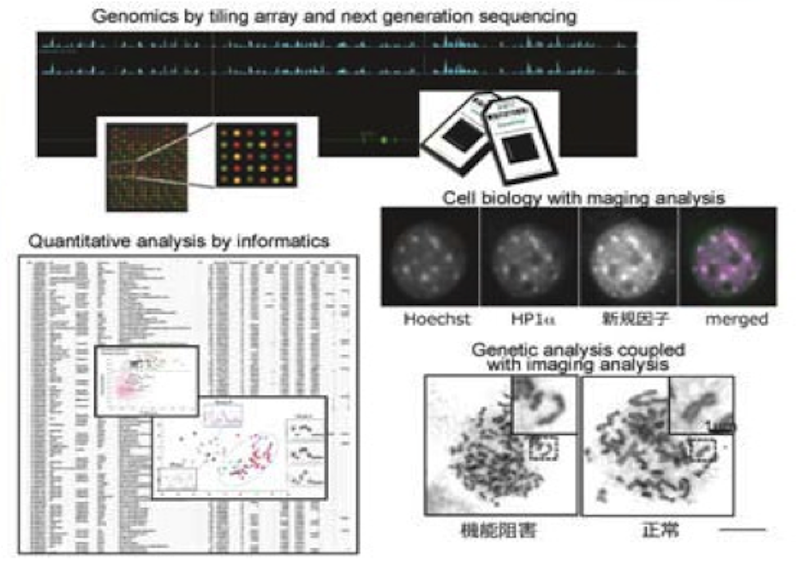 Cell surfaces are coated with a variety of intricately arranged glycoconjugates such as glycoproteins, glycolipids and proteoglycans. Therefore, elucidating the expression profiles of glycans derived from various classes of glycoconjugates is important to understand cellular glycosylation homeostasis and systems biology glycomics. We have established a series of methodologies for the analysis of N- and O-glycans derived from glycoproteins, glycosphingolipid glycans, glycosaminoglycans, and free oligosaccharides using mass spectrometry and liquid chromatography. Procedures to analyze each class of glycan were then combined to visualize the entire complement of sugars in the cellular glycome, so-called total cellular glycomics. When this technique was applied to various human cells, total cellular glycomes were found to be highly cell type-specific, demonstrating their utility as unique cellular descriptors by identifying known pluripotency biomarkers as well as novel candidate biomarkers. In addition, we extensively analyzed the relationship between altered glycosylation and causal genetic alteration(s) by employing a unique approach that applies comprehensive glycomic analysis to a multistep tumorigenesis model.